Despite the refusal of the Secretary General of the Egyptian Supreme Council of Antiquities, Zahi Hawass, to release any DNA results which might indicate the racial ancestry of Pharaoh Tutankhamen, the leaked results reveal that King Tut’s DNA is a 99.6 percent match with Western European Y chromosomes. 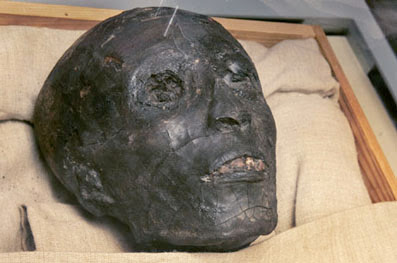 The DNA test results were inadvertently revealed on a Discovery Channel TV documentary filmed with Hawass’s permission — but it seems as if the Egyptian failed to spot the giveaway part of the documentary which revealed the test results.

Hawass previously announced that he would not release the racial DNA results of Egyptian mummies — obviously because he feared the consequences of such a revelation.

Firstly, here is a brief explanation of the results visible in the video. It is a list of what is called Short Tandem Repeats (STRs).

STRs are repeated DNA sequences which are “short repeat units” whose characteristics make them especially suitable for human identification.

These STR values for 17 markers visible in the video are as follows:

What does this mean? Fortunately, a genius by the name of Whit Athey provides the key to this list. Mr Athey is a retired physicist whose working career was primarily at the Food and Drug Administration where he was chief of one of the medical device labs.

Mr Athey received his doctorate in physics and biochemistry at Tufts University, and undergraduate (engineering) and masters (math) degrees at Auburn University. For several years during the 1980s, he also taught one course each semester in the electrical engineering department of the University of Maryland. Besides his interest in genetic genealogy, he is an amateur astronomer and has his own small observatory near his home in Brookeville, MD.

He also runs a very valuable website called the “Haplogroup Predictor” which allows users to input STR data and generate the haplogroup which marks those STR data.

For those who want to know what a haplogroup is, here is a “simple” definition: a haplogroup is a group of similar haplotypes that share a common ancestor with a single nucleotide polymorphism (SNP) mutation.

Still none the wiser? Damn these scientists.

Ok, let’s try it this way: a haplotype is a combination of multiple specific locations of a gene or DNA sequence on a chromosome.

Haplogroups are assigned letters of the alphabet, and refinements consist of additional number and letter combinations, for example R1b or R1b1. Y-chromosome and mitochondrial DNA haplogroups have different haplogroup designations. In essence, haplogroups give an inisight into ancestral origins dating back thousands of years.

By entering all the STR data inadvertently shown on the Discovery video, a 99.6 percent fit with the R1b haplogroup is revealed.

The significance is, of course, that R1b is the most common Y-chromosome haplogroup in Europe reaching its highest concentrations in Ireland, Scotland, western England and the European Atlantic seaboard — in other words, European through and through. 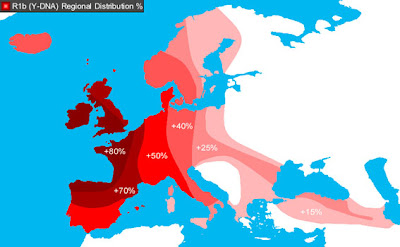 So much for the Afro-centrists and others who have derided the very obvious northwestern European appearance of a large number of the pharonic mummies. It seems like March of the Titans was right after all…

Funny, didn't see this on BBCs 'The One show' are you sure?
I learnt recently on T O S that Britain was a 'truly diverse and multicultural society' since Roman times. This was proven by sleletons found in the foundations of a wall in York, well only two skeletons actually....well they might have been mixed race...well....oh the beeb you have to laugh at their self flagellatic sickness!!

Mr. Kemp, an Rb1 Y-chromosome match represents only one portion of who we are as individuals, as we inherit DNA from all of our ancestors. The Y-chromosome match is only one part of the picture. For example, there are many African-American men in the United States today who have Rb1 Y-chromosome matches because of white males conceiving children with slave women. If that union happened as far back as the 1600s, a man today would still have the match. A haplogroup haplogroup determination is not to be taken as a marker of recent ancestry -- it is an indicator of ancient ancestry from thousands of years ago. You may wish to revisit the definition of a Haplogroup. The presence of a Rb1 match for a Y chromosome is not enough evidence alone to claim any one individual is white nor non-African origined.

Taneya -- As much as you may wish it otherwise (and I am sure you do, desperately) the reality is that someone with R1b is of white origin on the male side.
You can't get away from that, no matter how hard you try.
And yes, it does kick the "Afro-centric Egypt" theory into the garbage can.

Thank you Authur for your great explanation. Keep up the great work!

Shouldn't that be Ireland, Wales and the west of England? Scotland is virtually untouched according to the map.

I have the RB1 chromosome myself and I am Black. Black American, so mixed, but not Black nonetheless.

NegroFogey said... "I have the RB1 chromosome myself and I am Black."

All that means is you too have European ancestry.

It might come as a shock to many “African-Americans”—and whites—to realize that “black Americans” are actually largely of mixed-race, and not really “African” at all.