New claims by the Museum of London—replicated throughout the controlled media—that London has always been as “ethnically diverse” as it is now are easily disprovable lies being used to justify the ethnic cleansing of the city of white people.

The AFP newswire coverage of the story is a case in point:

A DNA analysis of four ancient Roman skeletons found in London shows the first inhabitants of the city were a multi-ethnic mix similar to contemporary Londoners, the Museum of London said on Monday. 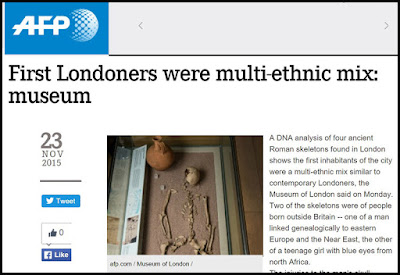 Firstly, they are deliberately confusing ethnicity and race.

Ethnicity is a cultural term, such as ‘German,’ ‘English,’ ‘Polish,’ or ‘Irish.’ Ethnicity is most often expressed in linguistic boundaries.

Race, however is a genetic term, and all Europeans have genetic commonality. The Museum of London is deliberately mixing up these two meanings to try and create the impression that London has always been racially diverse—when in fact all the evidence shows that it has always been racially homogenous until the advent of present-day Third World immigration.

All Europeans are comprised of a number of genetic strains which came together in three distinct waves, dating from the Paleolithic, Mesolithic, and Indo-European eras, which stretched over 40,000 years in total.

As a result, any investigation of European genetics will find shared DNA, and consequently that European national boundaries are the product of language rather than race.

The existence of common DNA strings in any given European nation does not mean that that nation is ‘ethnically diverse,’ merely that they share a common origin founding population which created Europe.

The claims by the Museum of London that the Roman-founded city’s population was “similar to contemporary Londoners,” does not stand up to the test of history, DNA, or even the ‘new’ analysis of the skeletons now being boasted about in the controlled media.

The new “multi-ethnic” claim is based on DNA-analysis of just four skeletons—hardly a scientifically accepted sample size, bearing in mind that at its height, Roman London had a population of at least 60,000.

Furthermore, of the four skeletons, only one is claimed to have DNA originating outside of Europe—and even that claim is highly dubious. 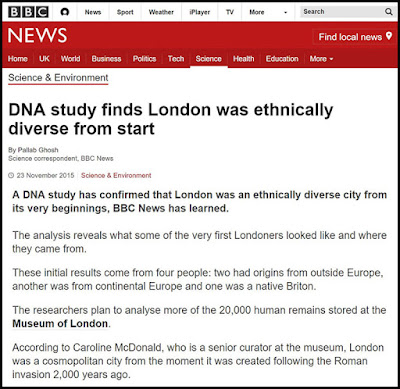 According to the BBC’s coverage of the “multi-ethnic London” story, the first skeleton, called the “Lant Street teenager,” showed that she “grew up in North Africa” but that her female DNA (mitochondrial DNA, or mtDNA) is common in southern and Eastern Europe. She had blue eyes, the study said.

Then, in a ridiculously unscientific manner, the BBC article claims that there ‘were things about her skeleton that suggested she had some Sub-Saharan African ancestry’—in other words, the claim to what they incorrectly call multi-ethnicity is based upon some unspecified ‘thing’ about the skeleton—while at the same time they say that all the DNA evidence shows that she was European. 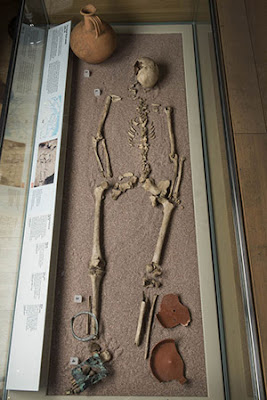 In reality, racial skeletal differences are vast and easily discernable to the naked eye, and any expert would have no trouble at all in definitively asserting racial origins based on a study of such a complete skeleton. No ‘suggesting’ would have to be done.

The second skeleton analyzed, known as the “Mansell Street man,” showed that he had dark brown hair and brown eyes. According to the BBC, his “mitochondrial DNA line was from North Africa and his remains show African traits as well.”

The Mansell Street man could well have non-European origins. It is well known that the Roman legions employed mercenaries from all over their empire, and there are recorded instances of some troops stationed along the Hadrian Wall being of non-European, or Middle Eastern, extraction. Their numbers were however tiny, especially when compared to the overall size of the population of Britain.

But, even more importantly, the Museum of London and the controlled media are either being incredibly ignorant, or willfully deceptive by insinuating that the present-day population of North Africa resembled that of 2,000 years ago.

In ancient times, North Africa had a huge original white European presence, known as the ‘old Europeans.’ It was these people who played a major role in creating the Carthaginian civilization, based in present-day Tunisia.

The Carthaginians were early Rome’s greatest enemy, and the famous Punic Wars between Rome and Carthage raged from 264 BC to 146 BC. That was the era of the famous Hannibal of Carthage, who came close to conquering Rome. He was a Carthaginian hero, and coins were issued in his time showing his face—and his European-origin race is clear from these depictions.


The Roman province of Africa consisted of a large piece of North African territory, and a vast network of European cities were built up, many of which can be seen to the present day.

Egypt, for its part, after its final collapse into multiracial backwardness around 800 BC, was occupied by the white Macedonians under Alexander the Great in 323 BC.

For the next 275 years, the white Macedonians ruled Egypt in a dynasty known as the Ptolemaic Kingdom. Their last ruler was the most famous queen of all, Cleopatra (actually the seventh queen of that name).

Despite propaganda to the contrary, Cleopatra and the Ptolemaic ruling elite were not African, but European Macedonian. After the fall of Cleopatra, Egypt also came under Roman rule.”

This does not however mean that a Roman-era skeleton found in London is multiracial—all it means is that some other Romans left similar genes among the gene pool of present-day North Africans.

The third skeleton used as “evidence” by the Museum of London to “prove” London’s “multi-ethnicity” is known as the “Gladiator.” According to the BBC, his mother's ancestral line “is common in Eastern Europe and the Middle East.”

Once again, this is perfectly normal for European mtDNA, which, as the genetic research website Eupedia correctly pointsout, is not as accurate in measuring ethnic ancestry as Y-DNA, or male ancestry is.

In fact, Eupedia even specifically says that in ‘Europe, mtDNA haplogroups are quite evenly spread over the continent, and therefore cannot be associated easily with ancient ethnicities.’

Furthermore, the ‘youngest’ mtDNA in Europe which is claimed to have originated in the Middle East, the K1 haplogroup, dates from 12,000 years ago, further casting doubt over any claim of ‘multi-ethnicity, as this gene would have been part of present-day Europe’s founding population.

The fourth and final skeleton used by the Museum of London’s “multi-ethnic” claim is known as the “Harper Road woman,” who had brown hair and brown eyes, but, as the BBC admits, was a native Briton.

This fourth skeleton was clearly one of the Old European R1B haplogroup-Britons, from whom nearly 70 percent of the present-day inhabitants of Britain originate, a figure which rises to 90 percent in Ireland.

In conclusion, it can be seen that of the four skeletons used by the Museum of London and the controlled media to allegedly ‘prove’ how ‘ethnically diverse’ Roman-era London was, only one is possibly of non-European origin.

This is very different to media claims that ‘DNA has confirmed that London was an ethnically diverse city from its very beginnings’ and similar such nonsense.

On the contrary, London, founded by the Romans, was a European city.

It is clear that the ‘multi-ethnic’ claim is being invented to try and justify the current Third World invasion of London which has turned it into a minority white city in just three decades.

To even suggest that Roman London was as “ethnically diverse” as present-day London, which has large numbers of Bangladeshis, Chinese, Ghanaians, Indians, Jamaicans, Nigerians, Pakistanis, and Turks, is an outright lie.


It is based on a politically-biased ‘interpretation’ given to just one skeleton’s dubious DNA, and is a deliberate deception, presented as fact to justify the ethnic cleansing of white European people fromBritain’s capital city. 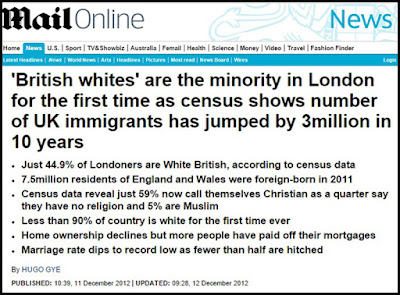 Thanks for that clear explanation.
Though I am not surprised that the mainstream media constantly get away with this narrative, I am sad that so few people see through it, and even fewer people are able or willing to speak up.
As a true indigenous native (Europe 100% - comprising: Great Britain 39%; Ireland 28%; Europe West 23%; Scandinavia 5%; Iberian Peninsula 4%; Finland/Northwest Russia < 1%) I support your efforts.

True Arabs from the Saudi Peninsula arrived in the Maghrib region in the 7th century and destroyed the white Berber population through violence, religious conversion, cultural destruction, and absorption. Then for centuries they imported large numbers of blacks as slaves. North Africa is a pretty good example of the end result of multi-racialism, although I'll refrain from giving my general opinion of them.

One thing they ignore is that the Romans and native Britain’s mostly practiced cremation and only shifted over to burial late in the empire when Christianity became popular. So most skeletons found in early Roman London would be non-Roman/British and therefore only represents a small part of the population

“”””The teenager had blue eyes and yet there were things about her skeleton that suggested some she had Sub-Saharan African ancestry..”””

I thought they claimed we were all the same, now they claim that there is something different about Sub-Saharan African Ancestry that is suppose to make you forget she has blue eyes.

Another trick they keep on playing is conflating North Africa with Sub-Saharan Africa even though its well know that North Africa at the time had been overrun several times by Phoenicians, Greeks, Romans etc. So even though tests of the teeth may show someone grew up in North Africa they could be of pure Roman stock