A Monkey in Silk is a Monkey No Less

Current mayor of London, the UK Conservative Party’s Boris Johnson, has recently (Thursday, 5 June 2014) announced in a piece in the UK’s The Telegraph newspaper that:

London will fall like the Greek city of Sparta if it turns away immigrants like the ancient militaristic regime which “kicked people out.

UK Prime Minister David Cameron's pledge to bring down immigration into the tens of thousands was a “policy failure” and should never have been attempted, the Mayor said.

"Look at Athens and Sparta," Johnson told the Telegraph.

"Athens was an open city and Sparta kicked people out. Go and look at the ruins of Athens and Sparta now and ask which of the two cities made the greatest contribution to civilisation. Look at the greatness of the American economy."

Johnson was educated at the European School of Brussels, Ashdown House School, Eton College, and Balliol College, Oxford—where, of all things, he read Classics.

He began a career in journalism with The Times and then The Telegraph, where he became Assistant Editor from 1994 to 1999. In that year, he became editor of The Spectator, a position he held until his election as a Member of Parliament in 2005. In 2008, he became Mayor of London.

Given all this, one might be forgiven for thinking that Johnson might actually know what he is talking about.

So why this blog post? Well, simply put, Johnson is talking complete and utter rubbish.

I had the temerity to scribble off a letter to The Telegraph in response to Johnson’s article.

I have no hope that they will actually print it, of course, so I thought I might as well put it up here, just for amusement, if nothing else:

Letters to the Editor
The Telegraph
Sir/Madam

With reference to Boris Johnson’s utterly unfounded claims that Sparta fell because it did not welcome foreigners (The Telegraph, 5 June 2014), please allow me to correct his clearly deficient historical knowledge.

The truth is exactly the opposite of what Mr. Johnson claims:

Firstly, it was Athens, not Sparta, which introduced a law in 451 BC which limited citizenship of that city state to those of Athenian biological descent only; and

Secondly, Sparta fell because it exhausted itself in military adventures, not because it expelled foreigners.

Mr. Johnson is obviously unaware that in 451 BC, the last great Athenian leader, Pericles, enacted a law which definitively expelled foreigners from Athenian citizenship.

As detailed in Aristotle’s book, Politics (Book 3, 1278a), Pericles’ law limited Athenian citizenship to those who had biological descent from Athenians—in other words, only those born of an Athenian mother and an Athenian father could be citizens of Athens.
Sparta never had any such law—so it was Athens, which did give so much to Western civilization, which “expelled foreigners,” not Sparta.

With regard to Sparta, what Mr. Johnson is mistakenly referring to is an institution known as the Crypteia.

This institution, according to Plutarch, was an annual event where on one night a year, certain private Spartan militia would hunt down and kill helots, or the lowest class members in Spartan society. It is true that these helots were not Spartans.

But Sparta did not fall because of this annual private militia action.

In fact, Sparta conquered all of southern Greece when its armies defeated those of Athens during the Peloponnesian War (431–404 BC), and remained supreme until 371 BC.

In that latter year, the Spartan army, which was already weakened by almost continual war, was defeated by a new alliance of people from central Greece, the Boerotians and Thebans, at the Battle of Leuctra.

This 371 BC defeat was so massive that Sparta, finally bled dry of its warrior class, was never again able to dominate Greece, and their territory was absorbed into the Second Achaean League, a confederation of Greek city states which lasted from 280 BC and 146 BC.

There is therefore, no link to Sparta “not welcoming foreigners” and its collapse, as Mr Johnson alleges.

The Athenian Golden Age ended with the Peloponnesian War in 404 BC—so actually Sparta outlived classical Athens by over a century.

Mr Johnson should really do his research better.

As Abraham Lincoln once said: “Better to remain silent and be thought a fool, than to speak and remove all doubt.”

It might be a coincidence, but shortly after I sent this letter, Johnson’s article suddenly vanished off the Telegraph’s website, and the URL was replaced with this message: 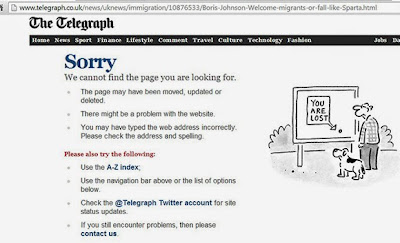 Fortunately, the article was copied by the Huffington Post, and you can still read it there.

God help Britain if this is the quality of “intellectual” who is not only Mayor of London, but also pretender to the leadership of the Conservative Party.
Posted by Arthur Kemp at 15:22:00