Given current demographic trends, European people will first become an outright minority in their own lands within the next thirty years. Thereafter, they will become a tiny minority, and shortly after that, will vanish completely under a flood of further immigration and miscegenation.

“Traditional” political activity has failed to stem the tide, and the time has come to consider an alternative strategy which will preserve Europeans in the post-Western age. This book describes the steps required to attain a practical solution, namely a European ethnostate, divorced from “white supremacy” over others. 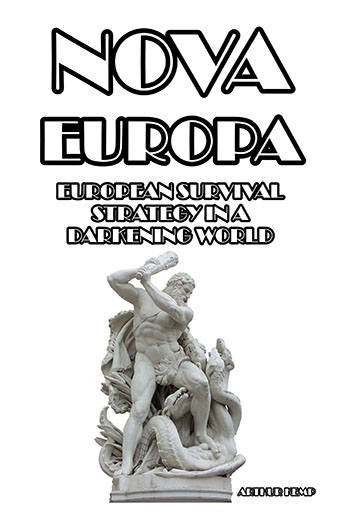 Drawing upon history and two practical examples (the Afrikaner town of Orania and the Zionist state of Israel), the author forms an coherent argument for the creation of, at first, local European communities, and then eventually, the creation of a European ethnostate arising from the chaos of a Third Worldized globe. It includes detailed steps and territorial proposals.

It is a positive, practical, answer to the crisis facing European man and which, if implemented, might provide his only salvation.

Why is it that only the European people are under threat in this way?

What is different about the other peoples of the earth, that they are not under threat of extinction in this manner?

The answer is simple, and obvious: it is because all the other people of the earth have homelands, or heartlands, where they can maintain their racial integrity and identity, no matter what else happens elsewhere in the world.
No matter how much the miscegenation process continues elsewhere, China will always be Chinese.

Japan will always be Japanese.

Africa will always be African.

Why therefore, is there no European heartland, in which European people are a majority, and in which they have the inalienable right to maintain their racial identity and integrity?

European people need a heartland, a homeland, just like any other people on earth.

Chapter One: The Premise
Race Is Reality—The Myth of “European Colonial Debt”—The Legal Right to Self Determination—The Moral Right to Self-Determination—Self Determination for Europeans Is the Opposite of White Supremacism—Case Study: Indian Self-Determination and That Nation’s Racially-Based Immigration Laws—Ethnostates Are a Universal Right—The Continued Existence of a Culture Is Dependent upon the Continued Existence of Its Founding People—Case Study: The Racial Demographic Displacement of the American Indians

Chapter Two: The Historical Background and the Current Reality

Chapter 6: Case Study 2—Zionism and the State of Israel

Chapter 7: The Plan and Its Implementation

Previous Case Studies—The Preconditions for a Successful Target Area—Problems and Answers—Option One: Selecting Small Regions in Existing States—Option Two: A Direct Approach to Demographically Suitable and Receptive Nation States—Final Decision on Territory Open-Ended and to be Decided by the “Europeanists”

Something has to be done before our children and Grandchildren face oblivion.

I remember John Tyndall saying over 15 years ago that "the 'Establishment' would not let us have a bookshop in Welling, what makes anyone think they would let us have our own state", but at this time when white Europeans are staring into the abyss something new has to be tried as opposed to playing the fixed Poker game of British Politics.

Who is in a worse demographic situation in your opinion: Europe or the US?

Dear Anonymous (12 Feb). The short answer to your question is that the establishment--certainly in western Europe--will not "let" anyone "have their own state." The reality simply has to be created on the ground, and in the darkness which will be the inevitable end result of current establishment immigration policy, that reality will take on new meaning.

Dear Anonymous (12 Feb). Unquestionably, America is in a worse demographic situation than western Europe. According to the US Census of 2010, whites made up 72 % of the population. That figure includes large numbers of self-classified whites, "caucasians," Middle Easterners, etc. etc. (see for example, the official report here, which does not even allow for classification of those groups http://www.census.gov/prod/cen2010/briefs/c2010br-05.pdf hence it is likely that the actual white population is already well in the mid 60 percent range. It is overwhelmingly old, and by 2019 (just six years hence) the majority of under 18s will be non-white. This is at least a decade and a half "ahead" of western Europe.

I feel a lot of anxiety with all this... Why people let themselves to be manipulated by a elite that despise them?

South Africa stil is a somewhat functional nation like Mexico and Brazil... This could be the possible future of the US and Europe instead of a collapse?

The US may have more nonwhites than Europe, but the whites here are a lot of more racially conservative than they are in Europe. We also are armed to the teeth. I have a small bit of hope.