Brexit is Irrelevant to Britain’s Future

The June 23 vote on British membership of the European Union is meaningless to the UK’s future—because longstanding immigration policies will have plunged Britain into minority white and Third World status by 2066.

This racial demographic shift will happen no matter what the referendum’s outcome might be—a fact which all of the “vote no” campaigns stoically ignore—and can only be averted by dramatic—and unlikely—internal political reform.

The projection that Britain will become majority nonwhite is not some flight of fancy or delusional rant.

Professor David Coleman, Supernumerary Fellow in Human Sciences and University Professor in Demography at St. John’s College, Oxford, produced a study in 2013 which showed that the aftereffects of “decades of migration” and natural reproduction rates will have made the UK the West’s “most ethnically diverse nation after 2050.”

Furthermore, Professor Coleman said, white Britons will be an outright minority in the UK by the year 2066. 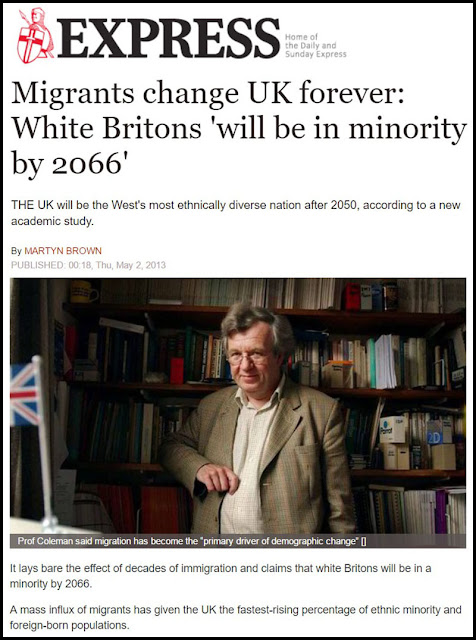 His findings were in a report compiled for the Migration Observatory, part of Oxford University’s Centre on MigrationPolicy and Society (COMPAS).

He wrote: “On current trends European populations will become more ethnically diverse, with the possibility that today’s majority ethnic groups will no longer comprise a numerical majority.”

According to the data—extracted from the Office of National Statistics (ONS) Census—as of 2011, around 20 percent of people in the UK are “nonwhite or non-British.”

Declining birth rates among white Britons is another factor, he said. In England and Wales, 25 percent of births were already to foreign-born mothers.

The report concluded that “the crossover for the whole country when the combined population of all ethnic minority groups together would exceed the population of white British will occur at around 2066.”

Professor Coleman’s figures are from 2012, it should be remembered. By 2016, the situation is much worse.

For example, in 2011, media reportsrevealed that at Ealing Hospital, West London, 80 percent of all babies bornwere to “foreign” mothers. 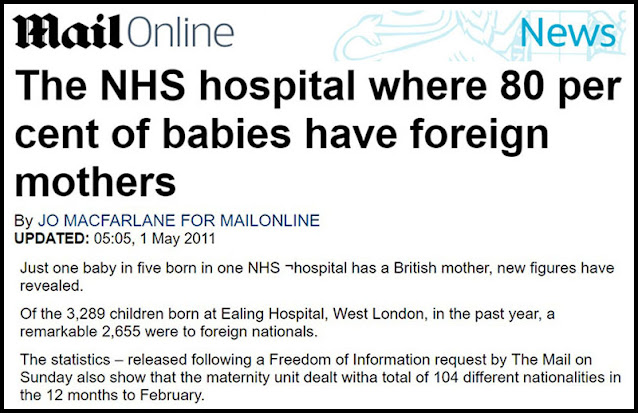 There were only 634 babies born to “British mothers” at Ealing hospital—although not even that figure determined if these “British” mothers were second of third generation Third World immigrants, a highly possible fact given that whites are already an outright minority in London.

In fact, the only thing that can be said with any certainty is that the 389 Polish mothers who gave birth at Ealing hospital during that time, would have been white.

The trends are obvious for anyone wishing to see them. According to the 2011 ONS Census, 45 percent of Londoners described themselves as "white British"—a drop from the 58 percent who did so just ten years earlier. 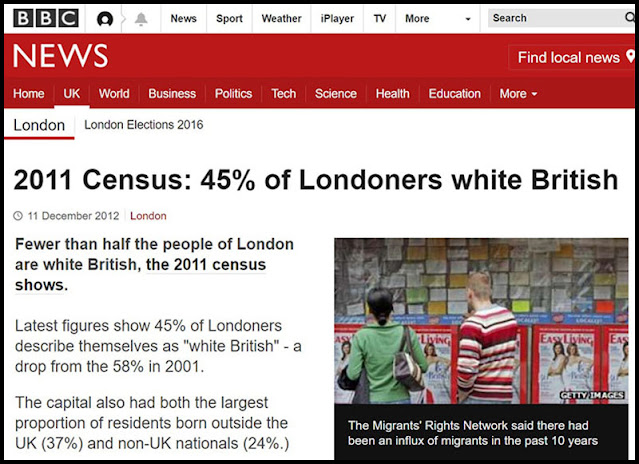 If that was not enough, the next generation of Londoners—that is, those currently in school—should tell anyone who wants to know, what that city will look like in another ten years.

According to 2012 figures released by the UK’sDepartment for Education (DFE), some 69 percent of all school children in Greater London are nonwhite.

The DFE figures show that for all of London—divided into “inner” and an “outer”” regions for statistical purposes, there were, in 2012, a total of 498,445 pupils at school.

Inner London had 176,920 pupils, of whom 81.3 percent of primary pupils were officially classified as “nonwhite British” by the DFE.

For secondary schools in Inner London, the DFE said that 80.7 percent are “nonwhite British.”

Averaged out, this means that some 67.25 percent of all of London’s schoolchildren are “nonwhite British”—and this would have been in 2012, four years ago.

If London is already 55 percent non-British, the implications of the school-age population entering the adult population will dramatically tip the population balance even more within the next five years.

Birmingham is Britain’s second largest city—and it is in exactly the same positon as London.

In 2011—that is, five years ago already—a studyby Professor Ludi Simpson, Professor of Population Studies at ManchesterUniversity, revealed that the city of Birmingham is set to become minority white even if there is no further immigration. 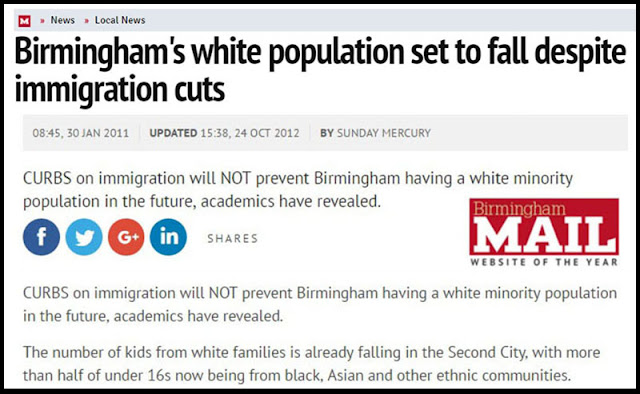 In a report on the declining number of white British schoolchildren in Birmingham, Professor Simpson said that “curbs on immigration will not prevent Birmingham having a white minority population in the future.”

As reported in the Birmingham Mail in 2011, the number of children from “white families is already falling in the Second City, with more than half of under 16s now being from black, Asian, and other ethnic communities.”

“There has been greater diversity of ethnic origins in Britain and Birmingham for each of the past five decades and longer,” he said. “That is unlikely to change.”

“Future immigration is not the reason for this change,” Professor Simpson pointed out—meaning that natural reproduction rates of already existing Third World immigrants was more than enough to swamp the city.

Once again, this is happening completely irrelevant of EU membership.

According to a 2013 report issued by theBirmingham Community Safety Partnership (BCSP), just 31 percent of children in that city’s schools were classified as white.

The report also revealed that children spoke a total of 108 languages at home, including Urdu, Punjabi, Bengali, Somali, and others.

According to the 2011 ONS Census for the city of Manchester, what it called “Ethnic Minority Groups (not White),” accounted for 33.4 percent of the population in that metropolis.
However, that overall figure hides the reality of the age spread of the Third World immigrant population.

According to the “Ethnic groups in Manchester by age and sex (residents) Census 2011” (Table 2, Manchester CityCouncil Public Intelligence Population Publications, report “A17 2011 EthnicGroups by broad age and sex”), Third World immigrants dominate the under-18 age group.

According to the ONS figures—which, it bears repeating once again, are already five years out of date—in the age group 0–4 years, “Ethnic Minority Groups (not White)” made up 52.4 percent of the total.

In the age group 5–9, “Ethnic Minority Groups (not White)” made up 52 percent of the total.

The effect of this upon Manchester’s immediate demographic future—that is, within the next five years—is obvious. The city—the third largest in Britain after London and Birmingham—will be majority nonwhite within ten years.

Professor Coleman’s 2012 report was based on the then current “net rates of immigration,” which had been running at more than 200,000 a year.
The use of the words “net immigration” is, however, an old establishment political party trick to deceive the public about the true extent of Third World immigration into Britain.

In this way, 200,000 low-IQ sub-Saharan Africans coming into Britain are put on the same level as say, 50,000 white Britons retiring to Spain, or otherwise emigrating—and in this way, they justify the “stabilization” of the UK’s population, as if there has not really been any significant change at all.

The Conservative Party is the prime proponent of this “net migration” confidence trick—which they call “balanced migration.”

Even though the Conservative Party’s election manifesto regularly claims that they will bring “balanced migration levels” to the UK, of course they have never done anything of the sort, and Third World migration into Britain continues to be as high—if not higher—as it was during the Labour Party’s years in power.

Even the UK Independence Party (UKIP), which is currently the favored “alternative” party to the Conservative and Labour parties, often touts this “balanced migration” lie.

In its 2015 election manifesto, the party specifically said that “UKIP has no intention of ‘pulling up the drawbridge’ to Britain, as has been suggested. We simply want to control who walks over it, like nearly 200 other countries worldwide.” 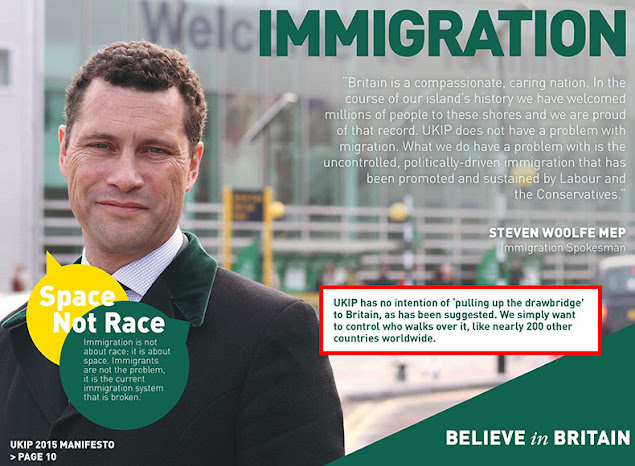 It is clear that not even UKIP dares to address the real issue—namely that there are already so many Third World immigrants and their descendants present in Britain, that even if the drawbridge had to be pulled up,” it would make no difference to the fact that by 2060, white British people are going to be a minority in the UK.

The conclusion of this demographic overview is unpalatable to many on the “right” who have campaigned so vigorously for the “no” vote in the June 23 UK referendum.

This conclusion is that membership of the EU is going to make no difference to the only real issue facing Britain: its survival as a First World, majority European, nation.

While there might—or might not, depending on whose statistics one wants to believe—be some economic advantage to leaving the EU—that doesn’t really matter.

EU membership will be irrelevant to the Kingdom of Britainistan in 2060, which will resemble a cross between Nigeria and Saudi Arabia.

The only way that this future can be averted is through a social and political revolution to halt and reverse Third World demographic replacement.

Given current political circumstances in Britain, what are the chances of such a political and social revolution?

The answer to that, unfortunately, is clear.


Wise people should now be thinking of alternatives.
Posted by Arthur Kemp at 16:52:00

Ok maybe that will happen, but if the UK leave the EU than perhaps they can initiate their own policies and accept immigrants from countries and societies that are happy to mix into the British system rather than being forced to accept those that want to impose their own ideas and turn the UK into a version of their systems which, over centuries, have always been at war and never advanced into a civilised country.