Those who follow news from South Africa will know that the big news there currently is that a health and beauty chain called Clicks is currently under attack after publishing an absurd series of images on its website which contrasted "dry and damaged hair" with fine and healthy, normal hair." 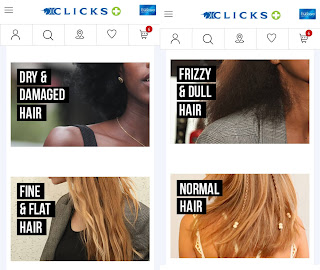 Predictably, there has been outrage from the blacks, who, quite correctly I may add, took the depiction of white hair as "normal” as an unbridled insult.

The radical Economic Freedom Fighters (EFF) party, which has a sizeable following and representation in the South African Parliament, launched its militants to  attack Clicks stores across the country, and some were severely damaged and firebombed in the resulting fracas.

At the same time, the media and politicians all climbed on the bandwagon, blaming, of course, white "systemic racism" for producing the advertisement. This was used as yet another example of how evil whites are by their very nature etc. etc.

Now, however, it has emerged that the offending advertisements weren’t even produced by whites, but by a nonwhite-led marketing team!

Clicks said in a media statement that all employees responsible for publishing the advertisement have also been suspended.

CEO Vikesh Ramsunder revealed yesterday that the digital team was made up of two black employees, two white employees, and a coloured manager.

“How they didn’t find this (advertisement) insensitive is beyond me… It shows that I have a lot of work to do in terms of sensitivity training,” Ramsunder told Cape Talk.

Ramsunder is right: how could anyone have thought that this advertisement would not give offence?

Given the widespread "affirmative action" (a code word for anti-white discrimination), it can be taken for granted that the whites on the "digital team" were lower ranking staff, and that the two blacks and the coloured manager were the final arbiters of this advertisement.

So there’s the answer.

Yet, in spite of this, whites will still get the blame for "systemic racism," because, as we know, whites are always to blame, for everything.

* Who owns Clicks?  It is a publicly listed company, and according to the 2019 Annual Company report, "more than 70% of the group’s shares are now held by offshore fund managers." (page 80). Hmm.