US Election 2020: A Lesson in Race, Demographics, Not “Fraud”

As the Trump faction scrambles to lodge a barrage of dubious legal appeals against the outcome of the US Presidential election 2020, a sober assessment of the racial voting patterns—and American demographics—provides a much simpler reason for the election result:  obvious racial demographics.

I would urge everyone to consider the following before jumping on the conspiracy bandwagon, which in this particular case, is being driven by the race-denying "conservatives."

In 2020, the majority of under 18 year olds in America were nonwhite. 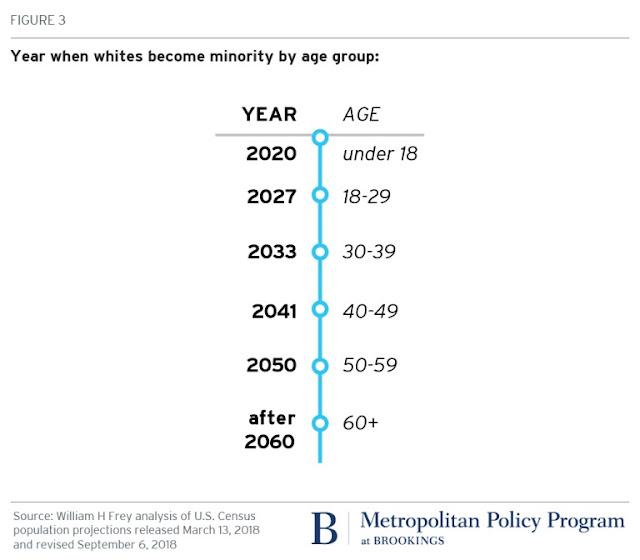 What this means is that in 2020, the majority of under 23 year olds in America are nonwhite.

Exit polls have revealed what this meant in terms of racial turnout for the candidates.

(Bear in mind that the US Federal definition of "white" includes all Arabs, all Middle Easterners, and anyone else who is not "black," "Latino,' or "native American.'

57% of whites voted for Trump

42 % of whites voted for Biden

87% of blacks voted for Biden

12% of blacks voted for Trump 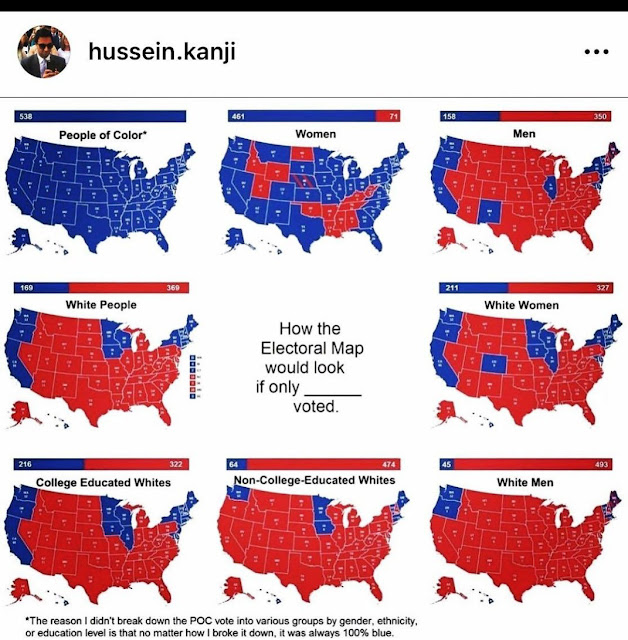 In a nutshell, Biden won the election through a combination of white liberals (a minority of the white vote) and massive nonwhite support.

This also explains why the results from the major metropolitan areas  (Philadelphia, Pittsburgh, Detroit, Raleigh etc) most often mentioned in the “fraud” conspiracy theories, went overwhelmingly for Biden.

There was no doubt some cheating (have you ever seen an election without some?) but it is highly doubtful that this was of such a large scale as to influence millions of votes.

These fraud conspiracy theories all ignore the reality of race and its effect upon society, and indeed, civilization itself.  In that way, they are even dangerous in themselves.

It was, quite frankly, surprising that Trump won in 2016, and would have been doubly surprising if he had won in 2020.

Furthermore, it is also clear that if the Republican Party had not lost in 2020, they would most certainly have lost in 2024.

This leads on to the inevitable question: What now for white Americans?

Firstly, It is clear that democracy, or elections, offers no hope of salvation for white America. The Third World invasion is now so complete, that it is impossible to win elections, even with the majority of the white vote, as 2020 has demonstrated.

Given this fact, what does the future hold for white Americans?  There are essentially two paths:

1. Just let things slide so that whites become a minority in the country they founded. This will lead to America becoming a large South Africa, which contains a shrinking white minority, hated and despised because they still are the only ones who can create wealth and progress; blamed for all nonwhite failures to achieve; and subjected to ever-increasing nonwhite violent criminality as the have-nots seize what little the whites have left.

2. Whites can congregate in an area (geographical consolidation), form a majority in those areas, and steadily push towards secession as the US collapses into Third World status.

Orania in South Africa provides a perfect parallel.  If whites trapped in South Africa do not start congregating in Orania and de facto seize possession of the Northern Cape to the western seaboard, they will be ultimately be exterminated. It is as simple as that.

Similarly, if white Americans do not physically congregate and de facto seize possession of a state or states in America, they too will be ultimately be exterminated. It is as simple as that.

This is the ultimate law of nature: those who form the majority population in a territory, determine the nature of the civilization in that region.

Anything else, such as conspiracy theories about "cheating" or "betrayal" are meaningless diversionary nonsense, and distract from a clear understanding of the racial factor as the ultimate determinant of history.

Since, for us, everything is assessed from the standpoint of our race, your historical perspective clearly and insightfully illuminates the present position of White America and the road ahead other commentators are too myopic, ignorant or cowardly to acknowledge. We need to thoroughly grasp your succinct analysis, think it over, draw the proper conclusions, and act upon them. Accordingly, Biden's "election" is preferable, because it drives home to millions of our kinfolk that the System is broken beyond repair, compelling them to consider alternative measures. Otherwise decent Aryan Americans, too soft and intimidated for radical methods, wrongly imagined Trump would do the job for them. All they had to do was vote for him. But he attacked the news media, which turned its full fury against him, proving that its masters are more powerful than the President himself. "US Election 2020" shows us where we are in time with raw honesty and stark realism --- on the cusp of either a golden age or a plunge into darkness.

I disagree. There was vote fraud, and very likely an element of that was computer vote fraud. Follow the chain of ownership of the companies that sold the voting machines and the software to tally the votes. They had the means and the motive to do it.

Demographics and traitors don't bite each other. Unbeatable indeed.

In my opinion this was the last chance for Whites to "control".
And yeah we know who the Real controllers are...

Let's see and I know you say we should be in the Orania mode anyway.

While I agree with everything what Mr.Kemp is saying, my opinion is that there was massive fraud. I am an independent/political atheist born in Eastern-Europe and I know exactly what I am talking about. I live in Wisconsin ( after first year in NY and almost 20 years in Chicago land ) and I was betting 1K that Trump was going to win the state, IF the (S)election is/was fair ?! Even people like Stephen Lendman (.org), which criticized Trump Adm. day by day, is saying that was a fraud of proportions.Please watch on youtube a demonstration ( live on CNN, with Anderson Cooper reporting about " our fair elections " ) ), how 560 votes were ' transferred ' from one candidate ( in this case GOP ), to another ( Democrat ), in 2018 Kentucky Governor election. WHY is youtube asking to sign in for an interview done by L. Todd Wood, with Russell Ramsland - a computer programing expert ?! I tell you WHY: to limit/censor the viewership ! https://youtu.be/ficae6x1Q5A

Firstly, time will tell whether Trump’s legal challenges are ‘dubious’ are not. There’s no smoke without fire as they say, and the Trump team appear to have amassed some convincing evidence. Whether that will be enough to overturn the result is another matter. If it does, and he gets another four years, then all hell will erupt from the usual suspects. Another four years would be a blow to the Globalists who hate his guts so much. But if Biden wins he will open up the sluice gates and swamp the US with migrants – ensuring that there will always be a permanent Democrat majority. So no chance of Trump getting back in 2024 (should he stand).

Biden is on record as having stated that it is “not a bad thing” that Whites in the US are becoming a minority adding, “that it’s a sign of our strength”.

Secondly, it’s not just demographics. An increasing number of Whites actually look forward to becoming a minority – and they are not all on the Left. Decades of brainwashing has left its mark. These lemmings will always act as a fifth column and work against the interests of their own kind. Ethno-masochism, like its flip side ethno-altruism, seems to be an exclusively White phenomenon. I.E you seldom find a Black person who is anti-Black, or a Jew who is anti-Jewish, etc.

There’s still room for hope though. Events are pushing more Whites in our direction. They are now openly saying and thinking things that they would not have said or thought even a few years ago. The savagery of the BLM ‘protests’ brings it home that no amount of apologising or appeasement will ever satisfy this crowd.

Where did you get the info that under 19 year old whites are a minority? I used this in a discussion and was challenged. He showed me the census that said that whites under 19 are 60% of that age group. I found 2 articles that said the same as you but they didn't give any info on why their finding was different from the census.

"Johnd said...
Where did you get the info that under 19 year old whites are a minority? I used this in a discussion and was challenged. He showed me the census that said that whites under 19 are 60% of that age group. I found 2 articles that said the same as you but they didn't give any info on why their finding was different from the census."

You will find the source material by clicking through on the images. It is a
Brookings Institution study

of US Census Data

The "60 percent" figure you are being quoted is an old tactic: they combine Hispanic and whitenumbers to produce a larger "white" statistic.