Latest Supreme Court Twist in US Election: Has Trump “Grabbed Them by the Pu**y?”

I—like many others—was somewhat dismissive of the latest US Supreme Court application, launched initially by the state of Texas against the states of Pennsylvania, Michigan, Wisconsin, and Georgia, alleging that the presidential elections in those states were invalid.  However, upon reading the plaintiff’s case carefully, and double checking with the constitution, I am forced to wonder if Trump has not indeed this time “grabbed them all by the pu**y.”

* Updaete 12/12/2020:  as predicted below, the Supreme Court used the "standing" issue to refuse to hear the case. There are now no more legal options for Trump. 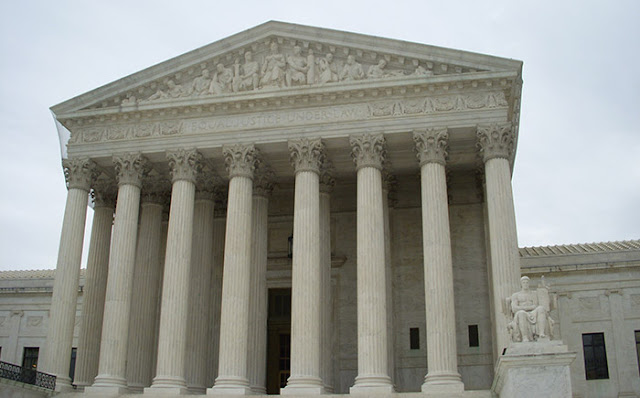 Essentially, the case before the court can be summed up as follows:

Article II of the US Constitution says that only the state legislatures can draw up the rules by which presidential elections for electors are held in the states.

"The executive Power shall be vested in a President of the United States of America. He shall hold his Office during the Term of four Years, and, together with the Vice President, chosen for the same Term, be elected, as follows:

Each State shall appoint, in such Manner as the Legislature thereof may direct, a Number of Electors . . . ."

The four states named as respondents (Pennsylvania, Michigan, Wisconsin, and Georgia) all ran their elections by rules created outside of the state legislatures, that is, rules created by judges, unelected civil servants, and orders from some individual politicians.

These rules all had to do with the rules governing mail-in ballots, which in Pennsylvania’s case, jumped from around 230,000 in 2016, to nearly 2.5 million in 2020. These arbitrary rules included the mailing out of unsolicited ballot forms to voters, a lack of enforcement of the signature check rules, amongst many other issued.

To use the mail-in ballots as an example: traditionally, when a voter applies for a mail in ballot, they must sign an application form.

The returned ballot is then cross checked against the original application form signature to try and ensure that it came from the person who asked for the ballot.

Obviously, when mail in ballots are sent out unsolicited, this double check process cannot be enforced or used.

Here is the important part: the decision to use unsolicited mail-in ballots was not the result of the legislatures of any of the states, but rather the made-up rules by individuals within the states’ civil service.

California, by contrast, ordered their election from within decisions taken in the state legislature. That is why they are not named as respondents.

So the bottom line is that Pennsylvania, Michigan, Wisconsin, and Georgia, all ran their elections in contravention of the US constitution.

The suit does not have to prove fraud: all it does is show that the states failed to adhere to the regulations as laid down in the constitution.

And on the face of it, this would appear to be a correct argument.

"This case presents a question of law: Did the Defendant States violate the Electors Clause by taking non-legislative actions to change the election rules that would govern the appointment of presidential electors?

These non-legislative changes to the Defendant States’ election laws facilitated the casting and counting of ballots in violation of state law, which, in turn, violated the Electors Clause of Article II, Section 1, Clause 2 of the U.S. Constitution.

By these unlawful acts, the Defendant States have not only tainted the integrity of their own citizens’ vote, but their actions have also debased the votes of citizens in Plaintiff State and other States that remained loyal to the Constitution."

The Texas suit goes on to suggest that the Court also order the remedy contained within the constitution. This is a clause which was inserted specifically to deal with disputes about election outcomes.

According to the constitution, there are two ways in which this dispute about the selection of electors can be solved. The Court can

(ii) refer the election of the president directly to Congress. In such a case, each state is given ONE vote based on state delegations.

The Republican Party controls the state legislatures of the four states named as respondents, and that party also makes up a majority of the state delegations in the House (if not a majority of individual delegates, but that doesn’t matter as each state is given a vote, not each individual congressman/woman).

In either of these two remedies, Trump will take the Electors from those four states, and pass the 270 Elector mark with ease, adding 62 electors to his total and reducing Biden’s by the same amount.

So what will the US Supreme Court do?  That is the million-dollar question.

If the Court follows through on the Constitution, they will have no choice but to agree with the Texan suit.

Furthermore, on the fact of it, it would appear that the only way this suit could be struck down is on a technicality on the standing of the parties involved, revolving around the claim that the States do not have the right to take each other to Court on such matters.

Whatever they decide, it will be an interesting few weeks ahead.