The very first ancient DNA extracted from two bodies recovered from the ruins of Pompeii (which was destroyed in the volcanic eruption of Mount Vesuvius in A.D 79) has revealed that at least one of the individuals in question was either of mixed African or Jewish ancestry. 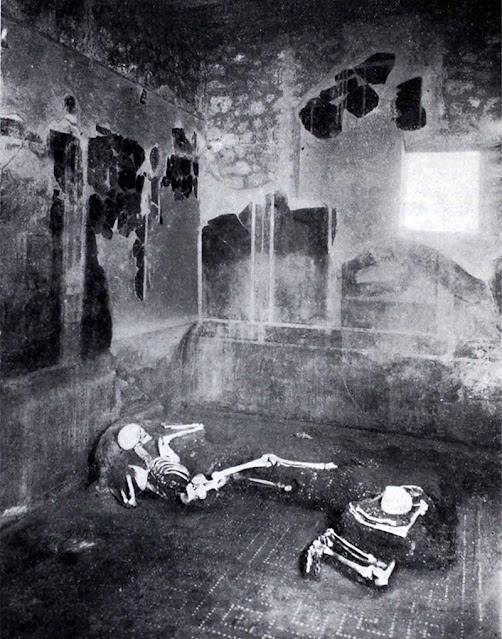 Above: A picture taken in 1934 of Room 9 of the Casa del Fabbro, with the remains of the skeletons as they were discovered. It was these skeletons which were the subject of the 2022 DNA analysis. (Image from Notizie degli Scavi di Antichità, 1934, p. 286, fig. 10.)  Below, the same scene photographed in 2009. 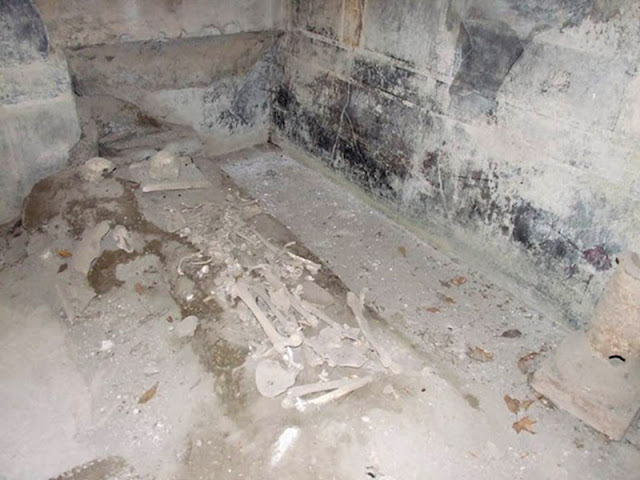 The DNA discovery, announced in various media outlets, was the product of a study led by Gabriele Scorrano et. al. from the Centre of Molecular Anthropology for Ancient DNA Studies, Department of Biology, University of Rome, titled “Bioarchaeological and palaeogenomic portrait of two Pompeians that died during the eruption of Vesuvius in 79 AD”, and published in the journal Nature Scientific Reports | (2022) 12:6468.

The analysed human remains came from Room 9 of the Casa del Fabbro (Regio I, Insula 10, civic 7), and, the paper states, their “position and orientation are compatible with instantaneous death due to the approach of the high-temperature volcanic ash cloud.”

Of the two skeletons analysed for DNA traces (done by sampling a petrous bone from each individual, and subjecting bone powder to intensive laboratory processes), only one (“Individual A”) produced enough detail for a complete genomic analysis.

Table 1 of that paper provided the completed results: 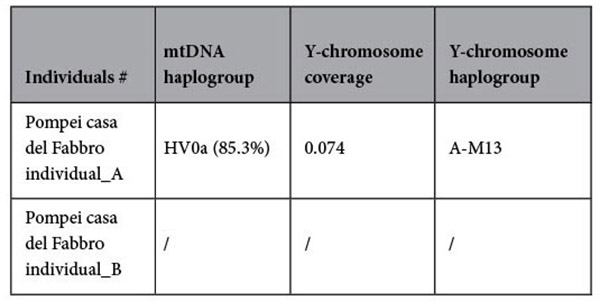 (“Table 1. Statistic parameters and contamination results of the individuals analysed” can be found on page 3 of the PDF of the article).

Accordingly, the paper reported on the Y-Chromone (male chromosome) result as follows:

“Individual A, albeit at low coverage (Table 1), was found to belong to the Y-chromosome lineage A-M13 (A1b1b2b), a rare lineage absent among ancient individuals from the Italian Peninsula, mainly found in Eastern Africa (~ 40%), but with known occurrences, at much lower frequencies, in the Near East (Turkey, Yemen, Egypt, Palestine, Jordan, Oman and Saudi Arabia).”

As stated quite definitively by Eupedia, Y haplogroup A-M13is an African and Semetic haplogroup:

“There are only rare and isolated cases of European men belonging to haplogroup A. Commercial tests have identified a few Scottish and Irish families (surnames Boyd, Logan and Taylor) all belonging to the same A1b1b2 (M13) subclade. This subclade is normally found in East Africa (Ethiopia, Sudan), but has also been found in Egypt, the Arabian peninsula, Palestine, Jordan, Turkey, Sicily, Sardinia and Algeria. It was certainly brought to Europe by Levantine people, be it during the Neolithic or later (Phoenicians, Jews, immigration within the Roman Empire.”

“The mitochondrial DNA haplogroup . . . revealed that the individual belongs to the haplogroup clade HV0a, the main monophyletic branch of HV0 and subclade of haplogroup HV. This mitochondrial lineage is absent among published Roman Imperial individuals from Italy.”

According to Eupedia, the mitrochondrial DNA HV is“indubitably [a] Middle Eastern haplogroup.

The Nature study, in the quotes above, makes great effort to state that neither of the two Haplogroups have been found in contemporary ancient DNA studies undertaken on Roman skeletons.

In other words, both male and female lineages of Individual A were “absent” from DNA recovered from all other comparable Roman Imperial DNA studies — i.e., they were not Romans.

However, as far as the autosomal DNA results go, the paper states that the “genome-wide analyses point out that the Pompeian individual A is genetically close to the extant Mediterranean peoples, mostly to Central Italians and Sardinians.

“It is plausible to think that, thanks to the expansion and the increase in effective population size during the Roman Imperial Age, the Roman genetic pool could have contributed to the nearby populations with a genetic signature that can still be recognized in the extant Mediterranean regions today.”

“strong affinities with the surrounding central Italian population from the Roman Imperial Age. Our findings suggest that, despite the extensive connection between Rome and other Mediterranean populations, a noticeable degree of genetic homogeneity exists in the Italian peninsula at that time.”

What this suggests, in plain language, is that the individual in question must have had some “foreign”, that is, European, admixture somewhere in his family tree in order to have produced those autosomal DNA results.

Figure 2 of the paper plots the position of Individual A in relation to other population groups: 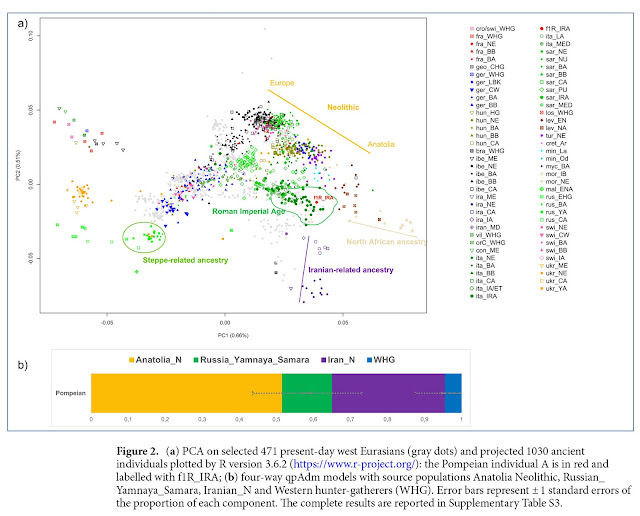 The ultimate conclusion, left unsaid by the paper, is that Individual was not originally Roman, and was of mixed descent, and most likely Jewish in origin.

This conclusion is in line with artistic evidence found elsewhere in Pompeii. For example, the famous portrait of Terentius Neo and his wife, found in his house in Regio 7, Insula 2, 6 in Pompeii, is a clear example of a racially-mixed type from that city. 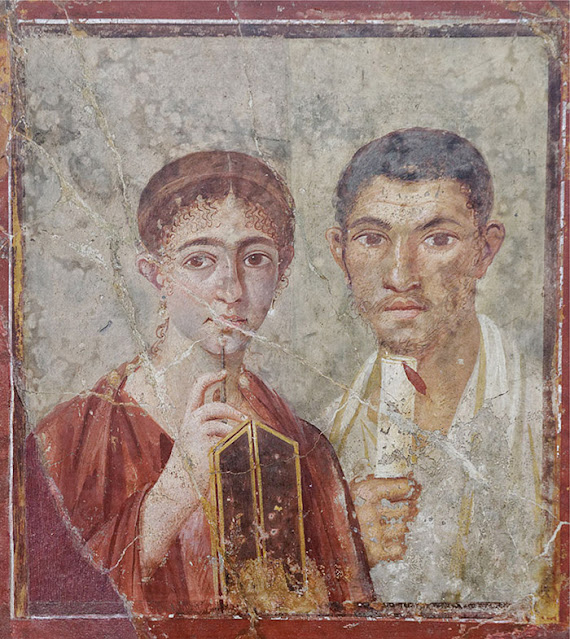 Terentius Neo and his wife, Pompeii.
Posted by Arthur Kemp at 21:50:00